In Summer 2013 I resolved to make my own film. I’d written a few scripts over the years, all intensely moody short pieces with titles like ‘Payday’ (about a chap who can’t afford the monthly repayments on his soul) and ‘The Girl in the Summer Dress’ (about the mysterious titular character and an equally mysterious suitcase). The first incarnation of ‘Radio Friendly’ written in 2005 was similarly serious; broken relationships, dead parents etc. but there a solid idea that I felt I could work with and turn into something upbeat. If I was going to pump time and energy into making a film then I wanted it to be fun. I also wanted to create a project that would allow me to explore the entire film making process by taking on the majority of the roles myself. I wanted to see how I could exploit each aspect of the production and post-production process to shape the narrative.

You can watch the result of my labours above (I hope you enjoyed it). And over the next few thousand words I’ll talk a bit about what went into making it. If you want to jump to a particular section these links should help.

I finished the first full version of the script for Radio Friendly on 14 June 2013 (here it is). 13 versions later I had the shooting script. In between I struggled mostly with the radio itself. I’d written a very fanciful description of in the first script, a mass of wires and bubbling tanks but I had no idea how to manifest such a thing so I eventually decided not to. The radio would be represented by lights and sound but never actually be seen. By this time I also had the a crew with Phil Macdonald as my cinematographer (bringing along his Canon C300) and Martin Salomonsen handling production sound. Katy Rushforth came on board as our makeup artist and Ed Cuss stepped in late on as gaffer. I had hoped to have an AD and a focus puller as well but the budget didn’t allow for it and as I’d committed to pay everyone on the production the decision was made for me. Of course I would have preferred more money and therefore more crew and kit, who wouldn’t? But in the end I think we worked really well as a small unit. 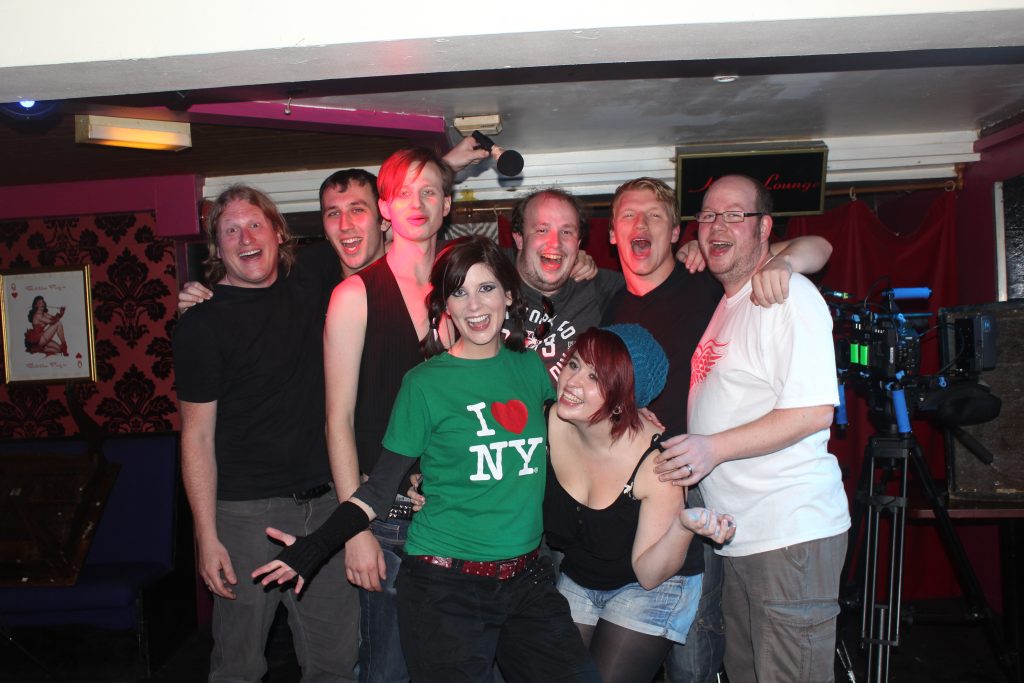 The location scouting was initially hampered by my own inability to think flexibly about how to block the scenes. After fruitless hours spent on Air B&B looking for houses with basements I realised I needed to get a bit more creative. I was able to use one of the undeveloped floors at my college for the office set. A friend let us into their house for half a day for the kitchen and bedrooms scenes. The (now sadly defunct) Tiger Lounge in Manchester allowed us in for a few hours before opening to shoot the bar and end credits. And for the key basement set I was able to hire a local music rehearsal room for the 3 days of the shoot. The pic below shows the room dressed as Jim’s basement looking very much like my student room circa 1997. 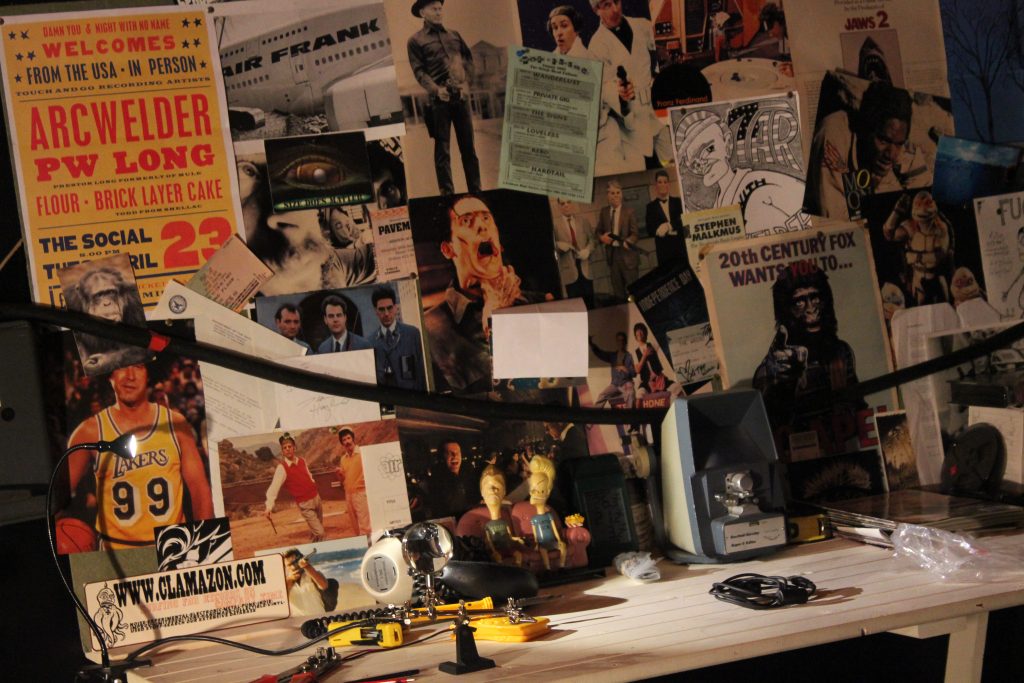 I desperately wanted to film at either an airport of train station for the Lucy/Jim reunion but the cost and logistics were beyond my means. I toyed with the idea of going guerrilla, after all the C300 isn’t that big but in the end the deciding factor was time. The somewhat fudged sequence that is in the final film is probably the only thing I’m actually unhappy with out of the entire process.

I loved casting. I met some very talented actors and had a blast watching them working with my words. Someone told me that a short film lives and dies on it’s cast and I took that to heart. In the end I think I got very lucky with my actors; Lee Burnitt, Sarah Oldknow, Sid Phoenix, Ben Rigby and Lisa Ronaghan.

With the films tagline being ‘Music, Love, Soldering’ I had grand plans of the music. The first version of the opening, the one I’d had in my head for years, was Jim knocking a bottle of milk down the front steps of his house in slow motion accompanied by ELP’s version of ‘Fanfare for the Common Man‘. My hopes were dashed when I made enquires and realised just how much the licensing would cost. I ran into similar issues with the track to accompany the radio switch on at the end of the film. I had always planned to use ‘Settle Down‘ by Unbelievable Truth but even securing a limited use for this less well know track would have blown the production budget. I went through at least another 5 options before acknowledging that I again needed to be a little more flexible in my thinking. The Free Music Archive came to my rescue and through it I found Broke for Free, The U.S. Army Blues and johnny_ripper’s beautiful ‘Left Hand Waltz’. 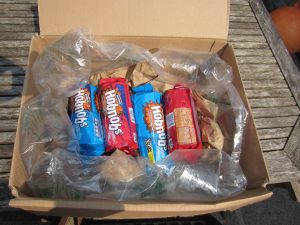 The final gig performance of Arcwelder’s ‘Harmonic Instrumental’ was something of a late addition to the script mainly predicated on my happening to stumble across the CD in the bottom of a drawer as I was thinking about the end of the film. Thankfully in this case the band were more than happy for me to use the track and only asked for some Hobnobs in payment. My eternal thanks to these three fine gentlemen from Minneapolis. 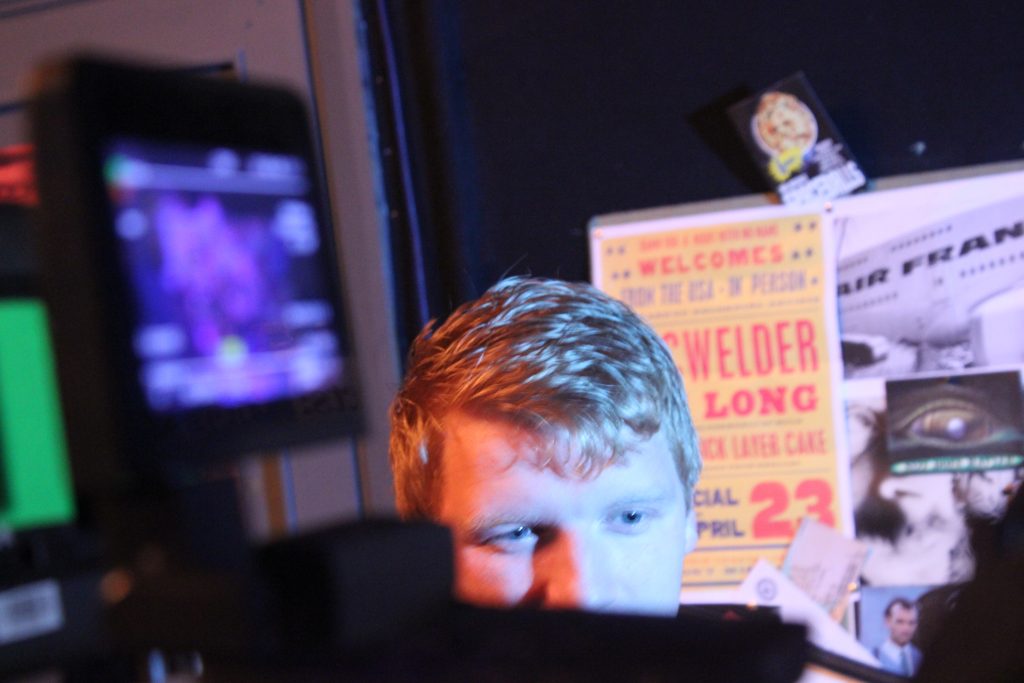 We filmed over 3 days spending the entirety of the first day at the basement set with Sid and Lee. That first day gave us a chance to ease into the production and work out some of the lighting gags for the radio. This was also my first day directing on anything so it was quite nice to only have one actor to deal with at the start and Sid for his part was great. Day 2 we shot the house and then back to the basement for Sid and Lisa which was almost continuity if not for the 90 minutes of lunch and travel in between. Day 3 was split between the office and the bar. Once again I was having a ball. Before this I had some peripheral awareness of what went in to making a film but the reality, even on this small scale was much more fun and intriguing. Just watching how the actors dealt with scenes and interacted with each other was fascinating. It wasn’t all gravy, I made a few mistakes. 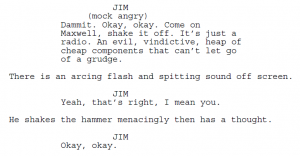 I repeatedly forgot to say ‘action’ and on one occasion destroyed a take by sniggering. I also managed to forget to shoot 3 exchanges between Jim and the radio which was definitely a rookie mistake. They are presented here for posterity. Saving the flashback gig for the end was a great way to finish they shoot. Most of the crew made a cameo appearance as the ‘crowd’ and after the 3rd or 4th take everyone started to love Arcwelder. My good friend Adam Birkett stepped in to drum and I took the guitar duties and again had a lot of fun. 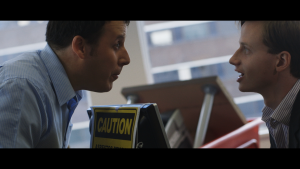 My favourite shot is definitely the move to the dutched angle in the conversation between Jim and Bob. Our tripod couldn’t manage this smoothly so myself and Phil ended up cuddling the C300 from either side and working in perfect sync to get the shot. A little warp stabilisation in Premiere Pro and voila. 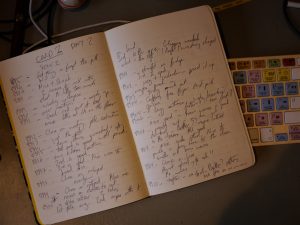 I’d shot the film quite tightly for reasons of both time and budget but it still took a while to log the footage (old school, in a notebook). I decided to go ahead and start cutting without the production dialogue as I had in mind that I wanted to cut as much as possible without the sound (an idea nabbed from Walter Murch). My first cut was long, nearly 22 minutes. The main culprit was the first basement scene. I had written it that Jim would have a few encounters with the radio, curse it a bit then the power would go out. The reality was it was just a guy apparently talking to himself for 2 minutes. The missing lines didn’t help but I don’t think they would have save it either. I needed a way to try and show the passing of time, quite a few hours, but squeeze it in to 30 seconds or so. I decided to go split screen and created the following whilst heavily medicated on Saul Bass. I think it’s clear that I somewhat overcooked it.

I felt the idea was still valid but it needed some help so I recruited my brother in law Peter and we created and shot me flicking through Jim’s notebook. In the edit this gave some context to what Jim was doing and also clarified for the audience the extent of the radio restoration project. Then it was a case of trimming, and trimming. In truth I probably needed to trim a lot more than I did but I like the feel of it at this length and it doesn’t really let up. 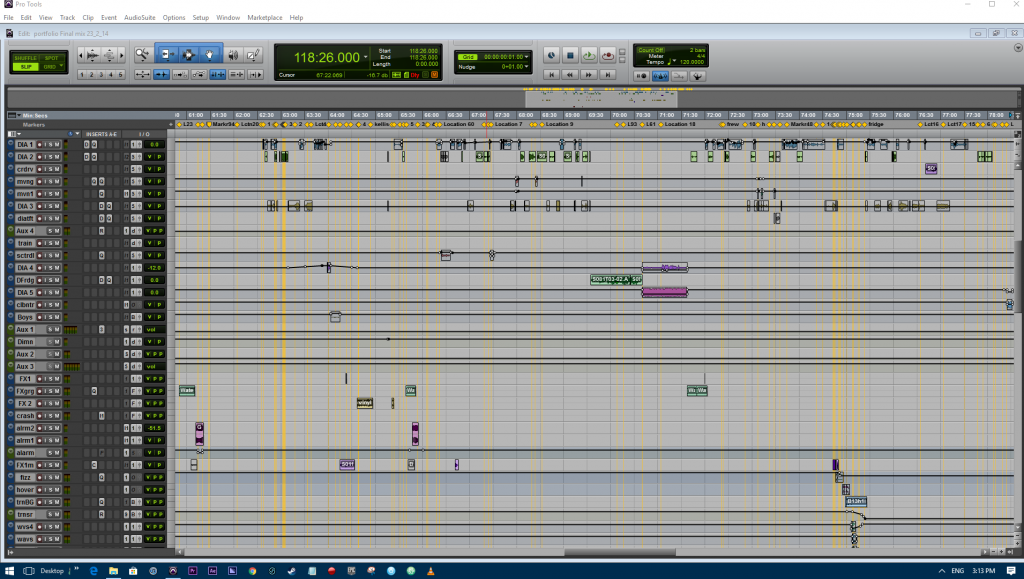 Having worked on the sound for so many other films it was a little strange coming to this point on my own project. I was lucky enough to have excellent production audio courtesy of Martin so we didn’t need to do an ADR, something I was keen to avoid based on previous experience (see Ellipse). I ended up having to phase my sound work around the edit and also came to realise that even the scenes I felt should be quite straight forward needed a lot more work than I anticipated. Nailing the character of the radio was definitely the hardest part of sound design process. I had written my self into a bit of a corner with all the discussion about water bottles so that had to form part of the sound. I initially went for something subtle but realised very quickly that the lack of a physical radio needed a much bolder approach. 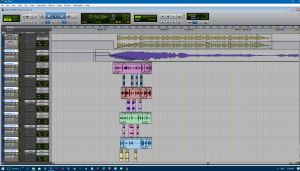 The final switch on, when the radio actually works was another challenge. In the end I combined multiple layers of tuning noise with 4 original tracks I recorded with my band back in 2003. These short clips of music were pitched and reversed to blend them with the noise and then allow the johnny_ripper track to show through. Below is the final switch on isolated from the sound mix.

I ended up grading the film 5 times. I started with Magic Bullet’s Colorista, then Color Finesse, Cineplus, Premiere Pro’s built in colour tools, then finally back to Colorista. I now have considerably more respect for the people who do this job. We shot the film using the Canon Log gamma setting on the C300 so there was always going to be a need to grade it. As I worked and re-worked the footage I began to appreciate just how much leeway was available to manipulate the image and also how badly wrong I could get it. After a few tests I realised I wasn’t going to get close without a reasonably calibrated monitor so I invested in the excellent HD Basics Blu-Ray from DVE. Though I didn’t want to get distracted by chasing the ‘film look’ I did find myself gravitating towards Matthew Scott’s video about using film grain. Using the 4K grain download from his site I created my own 30 second loop in After Effects.

In another nod to film I tried to find a way to smear the highlights in the image. In the end I adapted some of the duplicating and layering ideas Andrew Kramer uses . By duplicating the footage (as you can see in the above video) I was able to add aggressively push the highlights whilst also blurring the edges of them. By playing with the blend modes I was able to get the effect I was after. Judicious blending of grain on a scene by scene basis also helped.