This was my first feature project and I was lucky enough to get taken on as foley supervisor. This was also the first project I worked on entirely remotely. The foley team was scattered across Europe and everything was coordinated via email and FTP. I think I spent a week spotting the film in Pro Tools then another week working through my own share of the scenes at the studio. 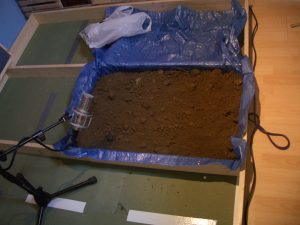 By this time I’d built a small foley pit at the studio so I carted in some soil from home and got a lot of my footstep sounds from that. When a little grass was called for I sacrificed one of my Star Trek videos and added a few meters of tape to the pit. 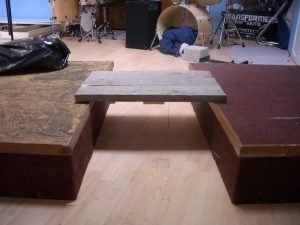 I also needed some good wooden footsteps to go with the hollow floored cabins. I built this little platform out of old scaffold boards and when I miced it from below it was really effective.

I found the fight scenes the hardest, particularly getting some variation into all the impact sounds. I was also having a nightmare deciding what ‘felt’ like the right sync for the punches as this video demonstrates all to well.

My favourite bits are definitely the clth performance at 47.49 which involved me wafting around a bit of heavy velvet curtain, and the cliched but satisfying ‘shing’ as she uncovers the sword at 48.17. Annoyingly my carefully synced ‘turnip head roll’ was dropped in favour of some emotional score at 49.33.