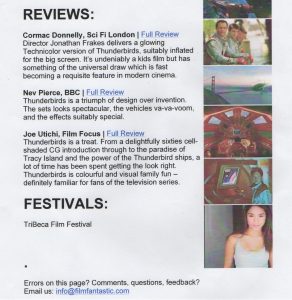 Between 2002 & 2005 I wrote film reviews for a number of websites including Unbarred.co.uk and www.sci-fi-london.com. 361 to be exact. I was living in London and working in an office and desperately wanted a job at Empire (or Neon for preference, but it went bust in 1999). The writing was mostly unpaid but I did get a lot of free trips to the cinema. I also ended up being quoted in a few places, most impressively (for me at least) on the website for The Gold Coast Film Fantastic Festival in 2004. As you can see, the extra flannel I put into my effort saw me place above the humble BBC reviewer.

Though I ended up at quite a few press conferences I rarely got to say more than a quick ‘Hi’ to anyone with the exception of Dean Haglund whom I got to spend a few hours with. A lovely chap who put up with my questions about his time on The X-Files despite having a new film to promote.

A few choice quotes from the archive;

Brotherhood is quite long, though not to the point of being flabby, but second and third viewings could conceivably entail just fast-forwarding to your favourite fight.

Sure Thomas Jane might have the smallest eyes of any man alive, Bumpo & Dave might be no more than white-trash Laurel & Hardy rip-offs, and it might be a bleak, sadistic view of the world, but the whole really is a great action film of the kind I thought had been lost to CGI, wire-work, and scripts knocked out between breakfast and lunch.

Confession – I used to get sent DVD screeners as well. A lot of DVD’s. Even with a reasonably flexible attitude towards sleep (and my day job) the only way I got through some of them was at 4X speed with subtitles on. No reviews were harmed in the commission of these heinous acts, but I did find myself going a bit cross-eyed after an hour or so.